Dreaming of the future of Vietnam with VinUni – An interview with Professor Sunmee Choi, the first Dean of College of Business & Management at VinUni

Professor Choi has spent 20 years teaching and researching at several highly rated universities in the world including in the United States (Pennsylvania State University, Cornell University), Europe (ESSEC Business School Paris, France), and Asia (Yonsei University). She has authored over 45 research papers about service and hotel management; has presented at more than 50 international scientific conferences; and has won many awards for research and teaching excellence throughout her distinguished career. Professor Choi is a prominent educator and scientist with a very practical approach. She has vast professional experience within the field of business management, hospitality, tourism and revenue management. When you meet Professor Sunmee Choi, you will be impressed by her energy, positive outlook, and inspirational energy. She talks fast, always comes up with original ideas, and does not compromise with vague and sub-standard solutions. 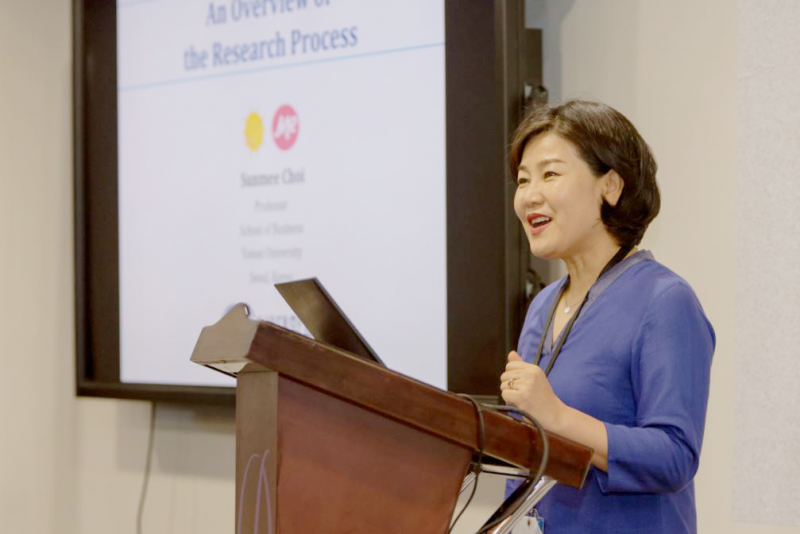 The original article in Korean can be found here: https://bit.ly/Sunmee_Choi)

Dreaming of the future of Vietnam with VinUni

An interview with Professor Sunmee Choi, the first Dean of College of Business & Management at VinUniversity

Founded by Vietnam’s leading business group, VinGroup, with a mission to be the first world-class, internationally accredited and ranked university in Vietnam, VinUniversity (VinUni) accepts its first group of freshmen in the fall of 2020. Dr Sunmee Choi, Professor of Service Operations at School of Business at Yonsei University, has been appointed as the founding Dean of the College of Business and Management of VinUni starting July 1st 2020.

1. Congratulations on your appointment as the founding Dean of the College of Business and Management of VinUni! As we all know, VinUni is a newly established private university founded by the leading Vietnam business group, VinGroup with an emphasis on following the highest international standards in research and teaching. What are your feelings about being the newly appointed?

VinGroup, a leading Vietnamese company, has the same status as the Korean Samsung Group or Hyundai Motors.  VinGroup has a total of 48 subsidiaries across industries ranging from construction, real estate developments, smartphones, semiconductor productions, hospitals, automobile productions, to hotels and resort businesses. In 2019, South Korea’s SK Group invested 1.2 trillion KRW in VinGroup, securing 6.1% of VinGroup’s total shares. The VinGroup, which plays a leading role in the fast-growing Vietnam economy, is creating a world-class university to foster talented people who will lead Vietnam’s future and contribute to national development.

In Vietnam, a new university for future pioneers such as Korea’s Yonsei University is created. I have been selected as the first dean of the College of Business and Management at VinUni, whose first classes will be enrolled in the fall of 2020. I will do my best to make VinUni attain the global excellence in education by fully utilizing my experiences at globally renowned educational institutes namely Yonsei University (Korea), Cornell University (USA) and ESSEC Business School (France).

2. What motivated you to apply for this position, and what was the appointment process?

The recruitment process for my position followed genuinely highest global standards. First of all, the announcement about the position was made to prestigious universities around the world, and submitted applications were thoroughly assessed. Then, candidates were interviewed following rigorous procedures. Although located in Vietnam, all of VinUni’s courses will be taught in English. Naturally, English was used 100% of the time during the recruitment process, which made it possible to recruit from the global market. The scope of responsibilities for the dean was also up to the standards of the Ivy League universities in the US.

VinUni starts off with three colleges: College of Business and Management, a College of Health Sciences and a College of Engineering and Computer Science. The Dean of the College of Health Science is from Italy, and the Dean for the College of Engineering and Technology is from Greece, and I am from Korea, the Dean of the College of Business and Management of VinUni. I was pleasantly amazed by the diversity of the VinUni’s faculty and staff. Also, the idea that a leading company in a country like Vietnam, which once had the fiercest and longest conflict against the US, is so open-minded to use US higher-education model in building its first private not-for-profit university.

3. What is the value and direction that the newly established business school will pursue in the future?

The founder of VinGroup, Mr. Phạm Nhật Vượng, established VinUni with the goal of fostering and developing talents. His life experiences had a profound effect on his decision to educate young people in Vietnam. As the Vietnam War continued, there were numerous human losses. After the conflict years, political leaders in Vietnam prepared the future of Vietnam by sending small groups of talented young people with high potential to study abroad. Mr. Phạm Nhật Vượng was one of the young talents.

In 1986, Vietnam adopted the “Doi Moi” (Reform) policy similar to Korea’s “5 Year Plan for Economic Development” and started opening its economy. Vietnam’s economy is rapidly growing into a medium-sized country thanks to its rich workforce, diverse natural resources, and effective economic policies. By achieving an average economic growth rate of 6% from 2008 to 2017, it achieved impressive economic growth while maintaining a socialist system. It is worth noting that Vietnam has grown to become Korea’s third-largest trade partner: as of 2017, China (25%) and the United States (12%) are closely followed by Vietnam (8.3%). However, there is a shortage of talent in Vietnam for the rapidly growing economy added on by Vietnam’s entry into the global market.

The primary educational goal of the newly established College of Business and Management of VinUni is to cultivate global-class talent to lead the Vietnamese economy. It aims to provide a curriculum that enables talented Vietnamese people to receive world-class education without having to go abroad.

4. The goal of the University is to educate and foster the most talented people with core abilities including intellectual abilities and passion for contributing to the development of their society; inspiring current and future generations, and exerting global influence. As the first dean, what are the areas you would like to focus on?

When I first heard that I got the job as the dean, my heart pounded with excitement at the prospect of serving this amazing university as the first dean of the College of Business and Management. Whatever the matter might be, the first step is always critical. Yonsei University owes its prestige to Underwood, the founder of the university, and the missionary to Korea who laid down the foundation for the university’s value and culture. Students at Yonsei are molded into elites who put their community and society before their personal interests. I will keep this in mind as I start my job as the dean. I would like to create a college culture where everybody is willing to serve their community, society, and world with a servant-leadership mindset.

5. Vietnam has steadily exhibited high economic growth rates in the past few years. I am excited to see what’s in store for Vietnam in the future. What kind of impacts do you foresee VinUni having on Vietnam?

Vietnam’s rapid economic growth has created the need for a large and robust workforce. We need strong business schools that can meet this need. Traditional Vietnamese business education systems won’t be able to produce the type of workforce that the current Vietnamese economy is looking for. Therefore, we will use a very focused strategy to develop the core competencies required for future business leaders for the Vietnamese economy. We will also do our best to cultivate business professionals suitable for the unique business environments in Vietnam. This way, VinUni can compete against other prestigious universities in Asia and in the world. To this end, we are working closely on the strengths of selected universities such as Yonsei University.

6. Last but not the least, if you have anything you want to say to the members of Yonsei University, please tell us.

Mr Woo-Choong Kim, the founder of Daewoo Group and a graduate of Yonsei School of Business, believed in the potential of Vietnam. He is highly respected by many young Vietnamese, I understand. He once said that “The world is vast, and there is so much to do!” He said this even before I entered college; many young Koreans were inspired by this remark. Back then, Koreans did not even have the freedom to travel overseas. We were the frog at the bottom of the well. However, President Woo-Choong Kim told our young people to look at the world as our stage. We were born in a relatively small country called Korea. Realizing that “the world is vast and there is so much to do,” we had to march out to the world. I would like to ask our members of Yonsei University to do the same. Yonsei graduates are all capable enough to work on the global stage. In the meantime, I would like to follow the path President Woo-Choong Kim and coach Hang-Seo Park have taken. I hope all Yonsei graduates will come along, too. 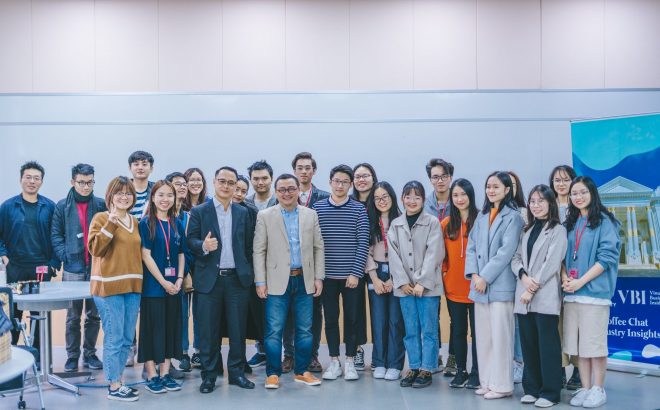 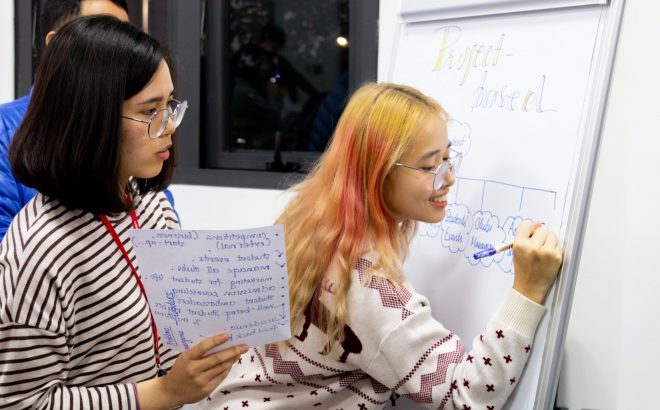 How important is the student council? What are the organizational structure, functions and duties of the VinUni Student […] 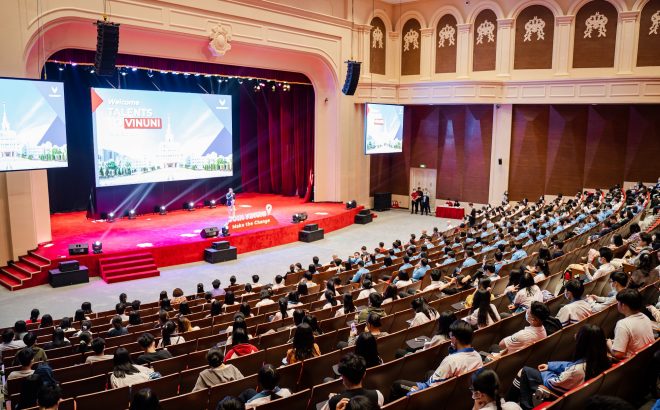 A constellation of talents at VinUniversity