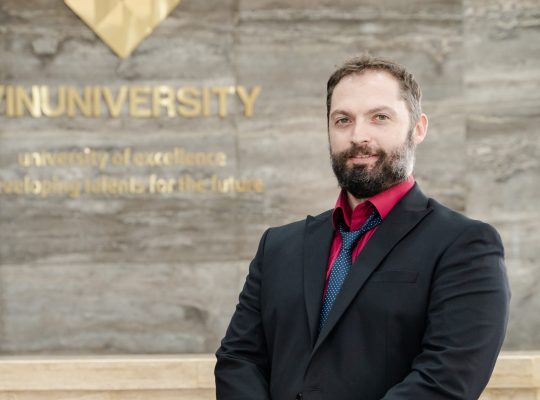 College of Engineering and Computer Science

From 2015 until the beginning of 2020, Thomas Oikonomou was an Assistant Professor in the Physics Department at the Nazarbayev University. The highlights of his timethereincluded beingtherunner up for the “Best Teacher” award in 2019 as voted by students. Additionally, his publications included several works with students and postdoc researchers as well as with numerous international collaborators.For hisadministrativeservice, hisachievements included working on the “Teaching and Learning Committee” and with the Faculty Senate.

Previous to that work, he conductedtwo research fellowships at the University of Crete from 2012 – 2015 and in 2009 at the Centro Brasileiro de Pesquisas Fisicas in Rio de Janeiro, Brazil. In 2008, he finished his PhD in Nonlinear Dynamical Systems and Bioinformatics at the National Kapodistrian University of Athens in collaboration with the National Center for Scientific Research in Greece. His PhD thesis earned “The best PhD Thesis Award” for that year. He started his journey in academia with a master’s degree in General Relativity in 2003 from the Friedrich-Schiller University of Jena in Germany.