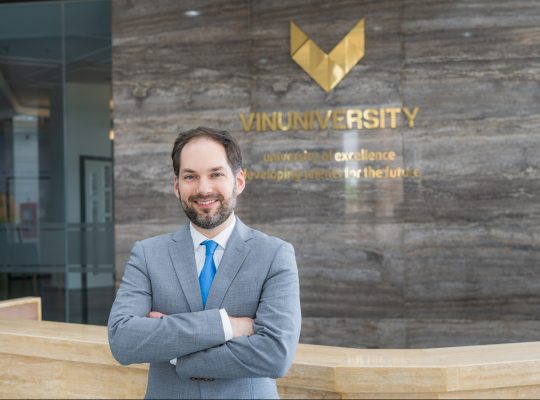 Dr. Elijah Riddle is the Program Director of the VinUniversity General Surgery Program and a Clinical Assistant Professor in the Department of Surgery at the University of Pennsylvania. Prior to moving to Vietnam to work at Vin University and Vinmec Times City International Hospital, he worked as a general surgeon in the Division of Traumatology, Surgical Critical Care, and Emergency Surgery at the Hospital of the University of Pennsylvania and Penn Presbyterian Medical Center.

Dr. Riddle graduated from the Georgia Institute of Technology with a Bachelor of Science with Highest Honor in Biomedical Engineering and a Minor in Spanish. He was selected as the 2008 Outstanding Senior in Biomedical Engineering. He completed his Doctor of Medicine degree at the Washington University in St. Louis School of Medicine, where he was elected to the Alpha Omega Alpha Honor Medical Society. He completed residency training in General Surgery at the University of Pennsylvania. During residency, he spent two years as the Minimally Invasive Surgery Design Fellow at the Children’s Hospital of Philadelphia, where his work focused on surgical education and surgical technology, including co-founding the Certificate in Academic Surgery at the Perelman School of Medicine. In 2019, he was awarded the Leonard D. Miller Award for excellence in clinical instruction of medical students by a surgical resident. Dr. Riddle is board-certified by the American Board of Surgery. His interest in global health dates back to his university days, when he spent time shadowing and translating in healthcare facilities in Mexico and Ecuador. As a resident, he traveled twice to Guatemala as a member of a surgical mission team and completed a global surgery rotation at Princess Marina Hospital in Botswana through the Botswana-UPenn Partnership. He is a member of the American College of Surgeons and Association for Academic Global Surgery.